Italian food is well known around the world, but there are still so many myths about it. So I decided to list some of the most common ones, while enjoying this beautiful country.

Most of the time people traveling to Italy realize the differences only when they get there. Back home of course we can still keep eating ‘Italian’ the way we are used to. Nevertheless I think it’s quite interesting and at times amusing to find out that, those things we have considered to be so authentic Italian, people in Italy have never even heard of 😉

Even Barilla, being the biggest exporting brand of pasta ‘encourages’ (e.g. the packages sold in the US) indirectly to overcook it by stating a time frame as cooking time, instead of one exact time.

Have you ever seen or heard about the trick as to how to check if the pasta is ready to be eaten, by throwing one spaghetti against the wall? I wonder who invented that 🙂 And if it sticks on it, apparently it’s done! Ok, so now I would dare to add a little side note: When the pasta truly sticks on the wall like glue, it is not ready. But it is way overcooked. 😉 Ok, seriously, set the timer, with the correct cooking time (if a time frame is given on the package, make sure to consider the shortest cooking time), and the pasta will be fine.

And, last advice: It’s very important that the water boils first, before throwing the pasta inside! 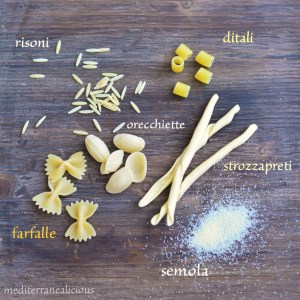 I could see a big astonishment on people’s faces, including my husband’s, when I told them how ‘important’ it is not to combine the ‘wrong’ pasta shape with the ‘wrong’ sauce! :)) Didn’t I already mention how picky we can be about food? 😉 Although all shapes consist of the main ingredients and they do taste the same (ok, sort of), it really does make a big difference! For instance you don’t wanna eat spaghetti with beans, or the tiny little shaped ones (e.g. risoni) with a tomato sauce. So, why not? Well, it just doesn’t match! 🙂

Oh, I haven’t seen more confusion and debates than this one! Actually it’s very simple to remember: There are two main dishes in Italy: pasta and risotto. They are not a starter, and not a side, either. I don’t blame anyone for getting confused if even some Italian restaurants abroad display it wrongly on their menus, pretending to serve authentic Italian cuisine.

And, being a main dish, it is served by itself, only. No bread, no salad. 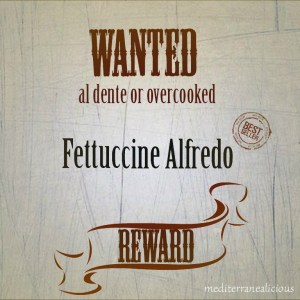 Well, I got introduced to Alfredo during my visits in the US. It was impossible to overlook ‘him’. I learned that Alfredo comes in all kind of versions: chicken Alfredo, Alfredo sauce, Fettuccine Alfredo, etc. And I kept wondering: Who is Alfredo?!

When my husband’s nephew asked me whether I could make some chicken Alfredo for him, I told him that I had no idea what that was.

Considering its popularity and the fact that it is being promoted as something Italian, that surprisingly in Italy probably no one has ever heard of, I was intrigued to find out more about this phenomenon. It turns out that Alfredo was a restaurant owner in Rome (http://www.alfredo-roma.it) about one century ago. Later on American celebrities were among the guests of that restaurant. So, in the 70s they introduced Alfredo’s recipes in a new restaurant opening in New York City. And that was the beginning of its success. Now that’s interesting! But should you go to Italy – outside of Rome – I do not recommend ordering anything under this name. As long as they haven’t been to the US, they won’t understand what you mean.

5. What cheese does really go on a pizza? And what is ‘pepperoni’?

Long story short: Mozzarella is the main cheese that is used on a pizza.

Restaurants often sell the margherita, being the cheapest one and being made with some way too greasy cheese imitation. It makes me furious to see that the one that is sold as ‘Pizza with tomatoes and mozzarella’ costs a couple of €/$ more, and is nothing else than THE margherita itself!

As far as ‘pepperoni’ is concerned, ‘peperoni’ – with one ‘p’ – means bell pepper. I was puzzled in the States when I heard about pepperoni pizza, as I didn’t know what it was. Nor will they know in Italy if you try to order it that way. Or the only risk you will run is to get a vegetarian pizza instead 😉

6. The importance of not skipping meals

Italians, oh Italians…don’t take away their lunch! It’s sacred. It will be hard to find an Italian who will suggest to meet you downtown around lunch time, if no lunch out is included. The importance of that meal becomes even more evident in the villages. At a certain time the streets get empty! And when you walk through the streets in the summertime, you can hear the noise of the dishes and silverware coming out of the open windows 😉

Germans, for example, are very flexible, and they couldn’t care less about fix times. They eat whenever they feel like it. Of course at work they have their schedule and tend to eat very early compared to Southern Europeans (btw, it’s almost impossible to beat Spanish eating time habits..).

What I’m trying to say is that there are exceptions everywhere, of course. Nevertheless, there are some generalities that become very obvious when observing different cultures. Sometimes I wish Italians could be a little more flexible with their schedules (it would just make life easier, at times..), while I wonder if Germans would enjoy cherishing more the values of a meal, sitting around the table with the family, and yes, even for hours. 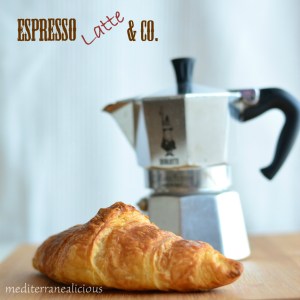 Espresso – as the name says, it can be defined as an express coffee. They drink it for breakfast, after lunch, at home or quickly at the bar, at the counter. There are different versions of espresso coffee. Just to name a few: cappuccino, ristretto (concentrated coffee), lungo (a longer-style), corretto (with a little shot of liquor).

You won’t find shots of vanilla, nor any other kind of extras added to your coffee. Nor will you find any ‘latte’. Latte means milk. And the one that corresponds to the ‘latte’ in the US is the caffellatte or latte macchiato. Ordering a ‘latte’ in Italy might get you a glass of milk 😉

One thing you will probably never see in Italy is someone drinking a cappuccino with a meal, or right after a meal. The locals drink it most of the time for breakfast, only. Maybe matched with a cornetto (croissant).

And talking about breakfast…this will take us to the last point.

8. The Italian breakfast – not really a big deal at all (besides the coffee)

No eggs, no bacon, no cheese nor ham. A coffee and a cornetto on the go, or maybe a cup of milk with some cookies at home. As you can see, breakfast is not the main meal in a typical Italian day. It’s quick and simple. And sweet. Which could be the reason why lunch is such a big deal instead.

Having only an espresso or a croissant in our stomach for several hours, by the time we reach lunch time we need more than a simple sandwich 😉

I would like to add a little but very useful suggestion that you might want to keep in mind if you end up traveling to the beautiful Peninsula:

If you want the real food, stay away from the main tourist attractions!! No matter how tempting the breathtaking view on Piazza Navona, or the Rialto Bridge might be; not only will the prices be much higher, but you will be served dishes adjusted to tourists’ tastes, that have little or anything in common with the local one!

Check out some hidden spots instead! The more Italians you have inside of the restaurants, the bigger the chance to eat Italian 😉 I have successfully applied this rule during my trips, in no matter what country or continent!

I hope you enjoyed this little culinary off-the-beaten-track excursion!

Lots of love from Milano,

Black Friday is here ! Are you ready!?!? As I promised I have some extra discounts for you! On top of everything they will…